Kindling the Divine Spark: Teachings on How to Preserve Spiritual Zeal by Abbot Herman

Only the benumbed soul doesn’t pray. Preserve in yourselves the feeling of need, and you will always have stimulation for prayer . . . Necessity teaches everything. The need for prayer teaches one to pray. (70)

Of all the aspects of the Christian faith, monasticism (either of the male or female variety) may be the most misunderstood. Yet I would venture to say that the health of a church, the help and the hope of the faith, depends on the strength of its monastic communities. A friend has said that in the history of the church, renewal has often come from the monasteries. They’re like the spiritual batteries by which the church occasionally must be recharged.

But contemporary misunderstandings arise because we don’t see what such communities are actually for, what they’re supposed to be doing, how they influence or interact with the “normal” life of the church in the rest of the world. They’re not practical. They’re antiquated. They’re disconnected. What have poverty, chastity, and continual prayer to do with marriage, children, career, or even evangelism?

St. Theophan the Recluse was a bishop in nineteenth-century Russia who had a passion for starting monasteries and convents, and he gave regular sermons at these various communities in which he spelled out for their members the goal of lives as monks and nuns. Many of these sermons, along with some brief biographical sketches, are collected in this volume, Kindling the Divine Spark: Teachings on How to Preserve Spiritual Zeal. There is a gap of culture and of a century or so, so while reading it’s easy to slip into an analysis of this work as an authoritarian bishop working to keep communities of women (nuns) under his influence. Except for the fact that Theophan ultimately abandoned his position to spend decades as a recluse, living out the life of austere monasticism that he had preached.

Besides being a living testimony to the spiritual heritage of Christianity across the world and throughout history, the power of monasticism, as illustrated in these sermons, is the example it provides for us in the world. Every Christian is called into the same struggle, and monasticism reminds us of the cost that we might otherwise be able to forget: that Christianity is not a system of knowledge or principles but a life lived out in community with the goal of perfection, of sanctifying individuals into the likeness of Christ.

Peace and tranquility and fulfillment are either the crown of perfection or a state of extreme fall, in which all spiritual striving and needs are extinguished . . . The state of those who are progressing toward perfection, however, is a state of struggle—intense, laborious, and full of tribulation. This state of progressing—is the narrow path. (40)

Of Theophan’s sermons, I thought “The Healing Pool” (Chapter 18) was the most profound. It talked about the paradox of considering oneself as the least, most humble, most struggling Christian and how this disposes the soul to be a source of help and healing for others. Advancing in the spiritual life, according to Theophan, does not make one more confident or sure of one’s self but rather more aware of one’s weakness and one’s innate and continual need for God. If the Christian life is one of resisting or overcoming the passions, Theophan argues, the more we understand ourselves and are aware of these passions, the more the struggle grows. We cannot resist passions of which we are not even aware.

What to take from all this into a life outside the monastery? The awareness of Christianity as a struggle—not a thrown switch or single-time salvation experience—is paradoxically a source of encouragement. When will I finally arrive at grace? When will I be delivered from the struggle against my own selfish, awkward, grasping nature? Theophan says: never. At least, not here. This is the testimony of monasticism, that sanctity is a process, and a process that grows more difficult as one progresses.

This had profound implications for prayer, the awareness that it is driven by necessity. We cannot manufacture a desire to pray, but we pray out of need. The more awake and aware we are of our need—and the more we open our hearts to the needs of others—the more we find within us the desire to pray.

Isn’t this view of salvation rather discouraging though? I mean, all this talk of struggle. How could that invite anyone to follow after Christ? And what good would it do? Here’s where empiricism comes into play, the testimony of experience and the test of Theophan’s claims: what kind of people are those from whom you find grace, healing, and encouragement? Who are those through whom real good is done? In the world, we go after those with confidence and firm leadership, often to our enduring disappointment and chagrin. But the saints of the church are those who embody the struggle: their humility and self-emptying, all of the things they give up or walk away from, their self-denial—all of this becomes a means of healing for those around them.

And then we’re back at Christ, the exemplar of the whole Christian life, who gave himself up in humility, who made himself the least of all—not simply (or even) to propitiate some kind of cosmic justice but to show that the nature of God himself, that the hidden secret at the heart of the universe, was this kind of love. And it was a struggle, even for him. (Read the account of the garden of Gethsemane.) So the monk or the nun (or the Christian) follows this example, and the struggle is not one of despair but of hope, because the testimony of Christ reveals the ultimate outcome of such a life of self-emptying love: union with God.

In this context, the sermons of Theophan take on a deeper significance than simply exhortations to men and women over a century ago who were participating in a practice of Christianity that no longer has any bearing on the contemporary world. His words, while still difficult, are for all of those who have taken up the struggle of living out the Christian faith. 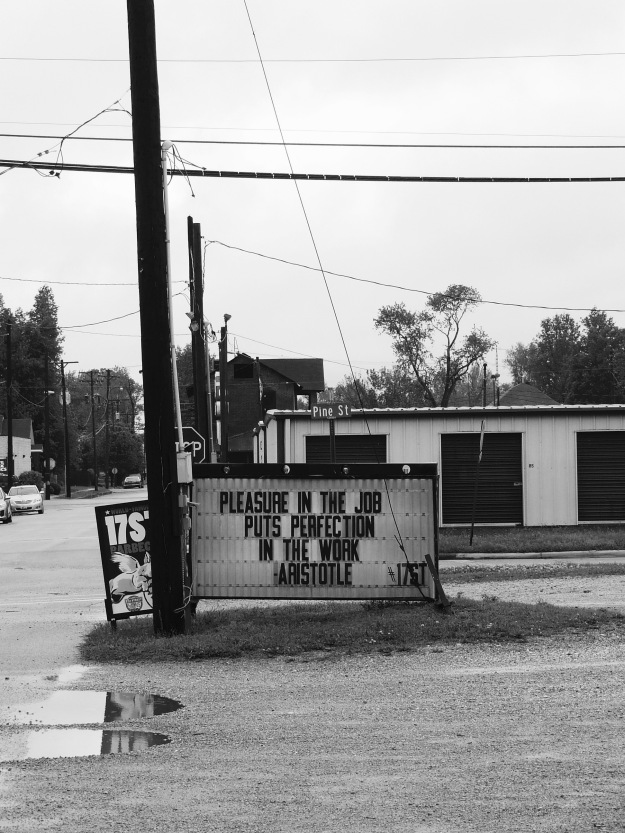