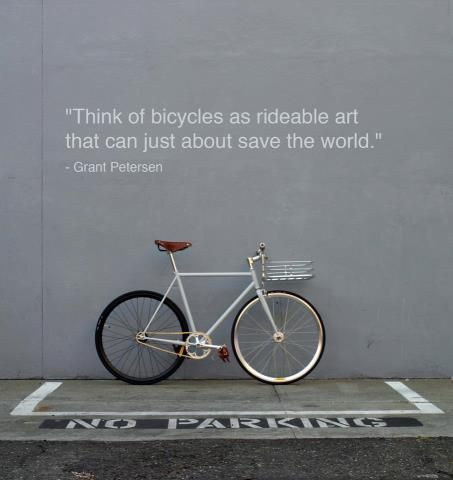 Last summer I sold my car and used a portion of the proceeds to buy a commuting bicycle. I wanted to start commuting by bike, and I figured the best way to do it was to remove the option of not doing it. This semester I’ve made the trip to and from my office every day but one by bike (plus a few Saturdays to do planetarium shows). By my calculations, I’ve ridden it about eight hundred miles, in rain and sun and wind and (now) snow. And I’ve been surprised how quickly I’ve become one of those bike people, with all their accompanying eccentricities and various shoulder-chips.

Take, for instance, my developing attitude toward motorists. There is of course the frustration with people who don’t understand how to share the road with bicycles (as well as with other bikers who don’t understand how to ride on the road). But beyond that, there’s an easy understanding of why bikers get so self-righteous. You screw up in a car with another car, and you might get a broken fender. You screw up in a car with a bicycle, and I might get dead. The annoyance you get passing someone driving with their face in their phone, on a bicycle shades quickly into outrage. Then add to that all the self-righteousness that comes from having made a decision you believe to be healthier for yourself, your community, and the planet.

“I’m doing this for you, morons,” I often find myself thinking charitably.

People who start to ride regularly, I think, become and remain bike people also because of the simple endorphin addiction. Within a couple weeks I started looking forward to my ride each morning like my wife looks forward to a cup of coffee, because– regardless of the weather– it’s a quiet time to wake up and get warmed up and prepped for the day. I arrive at my office energized. (It’s not a terribly long ride.) And at the end of each day, I look forward to riding home, because it’s a quiet time to unwind and think. I arrive home relaxed, something that’s much less likely if I’m battling traffic down Kennedy.

Then there’s the secret that bike people realize about weather: “miserable” weather is always more miserable viewed through a window. If you have the right gear, it’s much less miserable actually being out in it. I’ve biked through cold, wet days that looked absolutely bleak from a car window. But they’re never that bad if you’re riding through them, experiencing them. (In fairness I note that I’ve yet to survive a complete Illinois winter, so stay tuned. These are words I could likely be eating in a month’s time.)

But I think the most profound realization I’ve experienced as a biker– and probably the one that makes a lot of crazy bike people seem at right angles with society at large– is simply the perspective you gain from stepping outside the motorized transit system and no longer viewing it only from the inside (which is how almost all of us view it every day). It’s a system from which it is very difficult to remove oneself, and I recognize that many people simply can’t– they don’t have the time or the luxury. If you’re not inside a car daily though, it becomes easy to see how much our transit system has truly contributed to the erosion of community. Almost everyone today is trapped in a web of haste, expense, worry, and isolation (to say nothing at all about the fossil fuel industry) that comes from owning and depending on vehicular transportation.

Cars are not evil. I get that. But they’re part of a system that has profoundly shaped the communities in which we live– and they’ve undermined those communities through haste, isolation, and the destruction of common space. I’m not saying I stop and chat with every person I pass on my bicycle, but I at least have the opportunity (and sometimes I do). I see the neighborhoods I pass through. I experience weather and place. And I honestly believe people who live in cars don’t– or at least, if they do, it’s in a much reduced capacity.

Again, I’m not saying cars are bad. They’ve become necessary, especially outside of large cities. They allow transportation in ways that would otherwise be impossible but that today are essential. My family still has a minivan, and whenever we need to cross town as a family, I drive it. But it’s undeniable that cars and their accompanying networks of roads shape things, and that things have been lost because of that shaping. And these things– sense of place, community, lack of haste, simplicity– won’t be regained unless people get outside of them, unless they work to remove themselves from that system.

I also understand that not everyone can do this. Biking to work every day is a privilege. I have the means to afford a good bike and all the necessary gear, the health to make a ten-mile round trip each day, and the flexibility of schedule that allows me the time to do so. On top of that, I have an office of my own to change clothes in once I arrive, and I don’t sweat very badly.

Not everyone can be a bike commuter, I understand.

Some of these ideas were driven home for me while reading the travel journal of Francis Baily. Baily, who was British, eventually became an important nineteenth-century astronomer and president of the Royal Astronomical Society. As a young man though he traveled through portions of frontier America in 1796 and 1796. Reading his journal, I was struck by his description of Nashville. He talks about the geography, about the river and the town’s relationship to it. He had just passed overland from Natchez, Mississippi, through hundreds of miles of wilderness along the path that would eventually be known as the Natchez Trace.

I realized, as I read his description, that though I had been to Nashville and though it had been over two hundred years later, I knew nothing of the town’s geography or how it was situated along the river (or even what that river was called). I realized that I don’t learn places. When I travel, I coast in like a ghost along networks of highways. I skim over the surface. Even when I try to travel with intention, a la Heat Moon’s Blue Highways, I’m still pushing up against the temptation for haste, to just get to the next location and ignore what’s found along the road. I know how hard it is to stop a car even if you want to, even if you’re looking for those unexpected interruptions and detours.

What’s a shame but a sometimes necessary evil on long-distance trips becomes, I think, much more tragic in our own communities. We skim across the face of our own towns and cities. Our cars, and the scaffolding of roads supporting them, keep us isolated and alone. We don’t even know our streets, and we certainly don’t know our neighbors or our neighborhoods (other than to label them “good” or “bad” depending on how we feel in our cars in them after dark).

I don’t know if bicycles can save the world. But I think they’re a pretty good start for saving our communities.