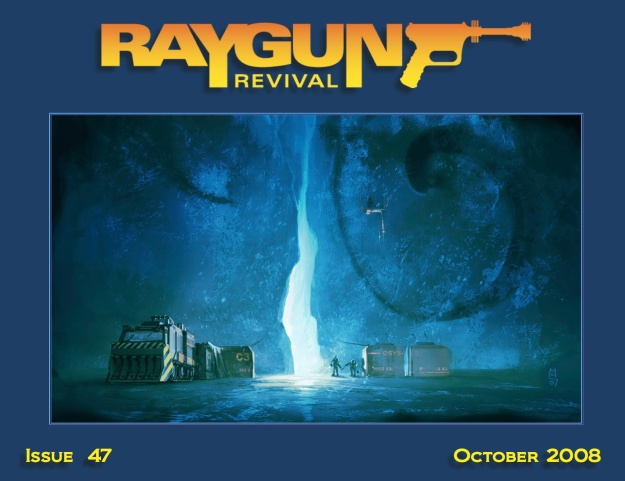 This was the first short story I published, back in 2008 (though going by actual word count, I suppose it’s technically a novelette). It appeared in the now-defunct Ray Gun Revival, and I was paid $10 for it. An author whom I highly esteem told me that I should have held on to it and tried to sell it to a professional market, but at the time I think the boost of confidence I received seeing it actually in print was much more valuable than the money. (He may have been right though. Ray Gun Revival was the first market I sent it to, so I never had a chance for feedback from places like Asimov’s, Lightspeed, or Clarkesworld.)

From the editor’s description in the introduction to the issue in which it appeared, “The Glorious Revolution” almost didn’t make it: “The Slushmasters were divided on this story. It has a strange cadence, a unique voice, a construction that almost struck me as epistolary, a dialogue in written letters. Some will hate it. Some will love it. I thought it was worth the risk.” Ambiguous praise, at best, though much of Revival‘s remit seemed more geared toward the pulpy blasters-and-spaceships variety of fiction.

One reader had these thoughts: “It was really a beautiful story, dream-like and creative. Left me rather in awe! The author’s ability to describe wonder, and majesty, and evoke the indescribable — excellent. I think I will remember this story for awhile. It reached inside me and rattled around and really made me feel what was happening in the story.”

“The Glorious Revolution” is what I would call a science fantasy. It’s about a rebellion that turns out to be much larger than it seems. It plays with ideas of social mathematics akin to Asimov’s psychohistory, hierarchies of scale, the ideal of monarchy, and (of course) falling in love with a princess. Call it sentiment for that first publication, but I’m still rather fond of this one.