Sometimes I’m a lazy stargazer. The first lunar eclipse of the year was April 15th. I wrote a post about it on the Adler Planetarium blog. But when it came to setting the alarm to get up in the middle of the night to view it, I was secretly relieved to go to bed to an overcast sky. William Herschel used to fall asleep reading astronomy books in bed. He, of course, eventually got out under the night sky. I often don’t get beyond the books in bed.

Which is perhaps one reason why the history of astronomy appeals to me. I admit it: sometimes I like reading about the discoveries made by observers throughout history more than I like sitting under a cold observatory dome alone at night. Books don’t cloud over. Manuscript collections usually can only be visited by day. If I fall asleep over my work, there’s no real fear– as there was for the Herschels– of falling off a telescope platform.

I do wish though I had caught the most recent lunar eclipse. They’re slow events, more sublime than spectacular. Not like a solar eclipse (which I have never witnessed, though 2017 is fast approaching).

The most recent display I curated at the Adler was of eclipse depictions throughout history. These are all from the works on paper collection at the Adler (maps, diagrams, pictures, things that can be hung on a wall). The images really are quite nice, though the pictures I took don’t do them justice. (The gallery has subdued lighting, and a camera flash would have only created glare.) My favorite is of a broadside poster printed in the 1760s in England providing information on an upcoming solar eclipse. This would have been hung in a public place and is an early form of public science education, explaining what causes the eclipse and what the public could expect to see.

If you’re in Chicago, stop by the planetarium and take a look. 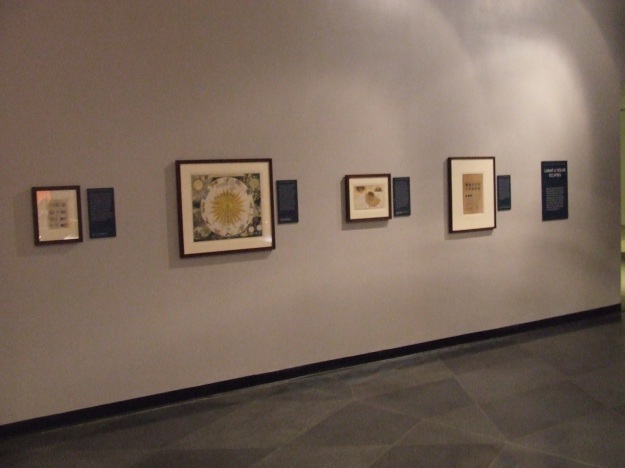