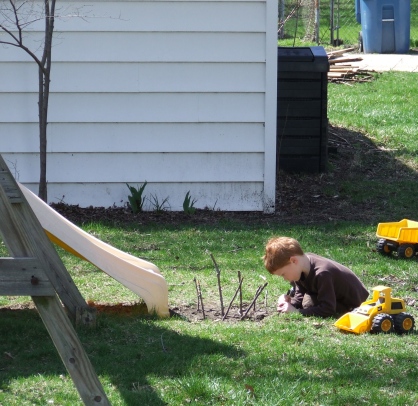 My new year’s resolutions this year– which are off to a rather inauspicious start, what with illness and snow days– revolve around my writing. I’ve resolved to try to rise early each morning and spend time writing. And, at the close of the year, I culled several fragments from my mammoth free-write file that had been growing up like brambles for the couple years or so, put them all in a tidy file marked 2014, and resolved to finish them. I’m not sure what that means– delete them or submit them or maybe post some of them here. But finish them.

So here’s one that I’ve found and finished. It was written over a year ago, on an afternoon far removed from the wasteland of snow outside the window right now. I think it does a good job getting at what I sometimes try to touch in my writings as well as the chaos that is writing on summer afternoons that are never empty or silent.

It’s been a long time since I did any free-writing, a long time since I journaled anything that wasn’t an account of papers written or research questions posed. I’ve finished my comprehensive exams. The decompression now beginning is slow, letting the air back in through the pockets and windows of my mind.

It’s also the feeling of not knowing where was I with the stories I was trying to tell. I wrote a few ideas down somewhere, but how much time will it take before they begin crowding out again? Some are still knocking around in here waiting to get out, but others are lying just beneath the rocks and stones to stir to wakefulness.

The kids are yelling outside the window. One of the twins, age six, stuck his head in and said this was the first day that felt like summer. They’re in the yard making up superheroes.

Their sister is yelling something over and over again that sounds like “Hydra.”

Something waiting just beneath the grass and stones to stir.

Their sister echoing, with slight variations. Her voice is harsher, sharper– cutting through the milky afternoon air above the low whine of a mower several lawns away.

Something waiting just beneath the grass and stones to stir. That’s spring, right? That’s the whole point. Lenten is come.

Footsteps flapping on the pavement, the opening door.

“Can you put this pinecone I found on my shelf for my collection?”

That’s not a pinecone, bud. That’s an old corncob maybe a squirrel was working on.

“My name was Green Laser, because I shot out lasers from my fingers and they were green.”

In and out, in and out. Slamming doors. Flapping of rubber soles on cement. Voices in the backyard.

The things an afternoon is made of.

Afternoons climbing up on the backs of other afternoons like the minerals left after the drop of water has fallen from the cave ceiling, the stack of years rising upward with a motionless slowness. A growing speleothem of daylights and moments and sharp words and quick smiles and broken glasses.

All my life, I realize, will be trying to recapture not the moments themselves but that quality of light and air and shade that hung over the fields and under the trees on the back roads between my hometown and the church campground in thick summer.

Something stirring to life around the corners, curling around the hedges of the fields, curling like fingers of ivy on the sill, like galaxies spiraling down from the edge of the priest’s slowly swung censor.