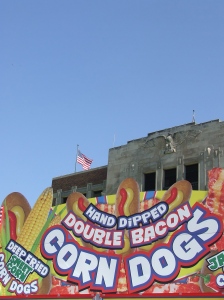 People in Iowa are proud of their fair. That was something common to everyone we talked with today (though this was of course a self-selecting audience—perhaps Iowans ashamed of their fair stayed home). Everyone we spoke with came to the fair each year, and the vendors agreed that of the several fairs they went to every season, this was the best. When asked why, an answer they agreed upon was friendliness. It’s a friendly fair, rooted in the history (as evidenced by the size and solidity of the buildings) and heritage of Iowans.

Yet for me the fair was also a strange patchwork of competing narratives. It was often difficult, especially in places like the agricultural building and the food exhibits, to differentiate between what was agricultural or culinary exhibition and what was commercialization and advertising. They bled into one another and created what often felt like parallel but separate fairs occurring in the same space. When we visited the agricultural building, for instance, the section of produce and floriculture was roped off, preventing a close look at the products of agriculture. Instead, lines of visitors were tightly bunched along the peripheral vendors. There was a divide: the casual visitors milled around the edges or shuffled through the exhibition halls, while a simultaneous, largely unseen process of judging and competition occurred among fair participants. We had a similar experience in the food exhibits, where rows of refrigerator displays alternated baked goods for judging (products of fair participants) and packaged, processed foods (apparently for advertizing to fair visitors).

Which leads me to the question of audience, voiced by someone in our debriefing discussion at the end of the day. Who is the fair for? Is it simply for creating a self-congratulating identity for the Iowans who visit? And does it accurately reflect the true nature of farming in Iowa or an idealized, cultural version of the farm that may no longer actually exist?

Part of what prompts this question is the disconnect I experienced between what I saw yesterday and today. Yesterday I saw miles of corn and soybean, and I heard a farm manager talk about industrialized farming. Today the closest I came to the corn I saw yesterday was probably the corn syrup in the Coke I had for lunch. The diversity concentrated at the fair and displayed in the agricultural building or the horse, cattle, and swine shows seems a cultural margin not reflective of the actual Iowan landscape.

And maybe that explains in part the patchwork disjoint I felt. The commercialized exhibits, the vendors, and the deep-fried fair food—that’s all part of the industrial machine built on corn and soy. The varieties of corn, potatoes, and fruit on display and judged in the agricultural building, the FFA kids with their animals—that’s a cultural remnant celebrated as heritage. But they seem two very different worlds, and it’s unclear to me how they can continue to coexist.