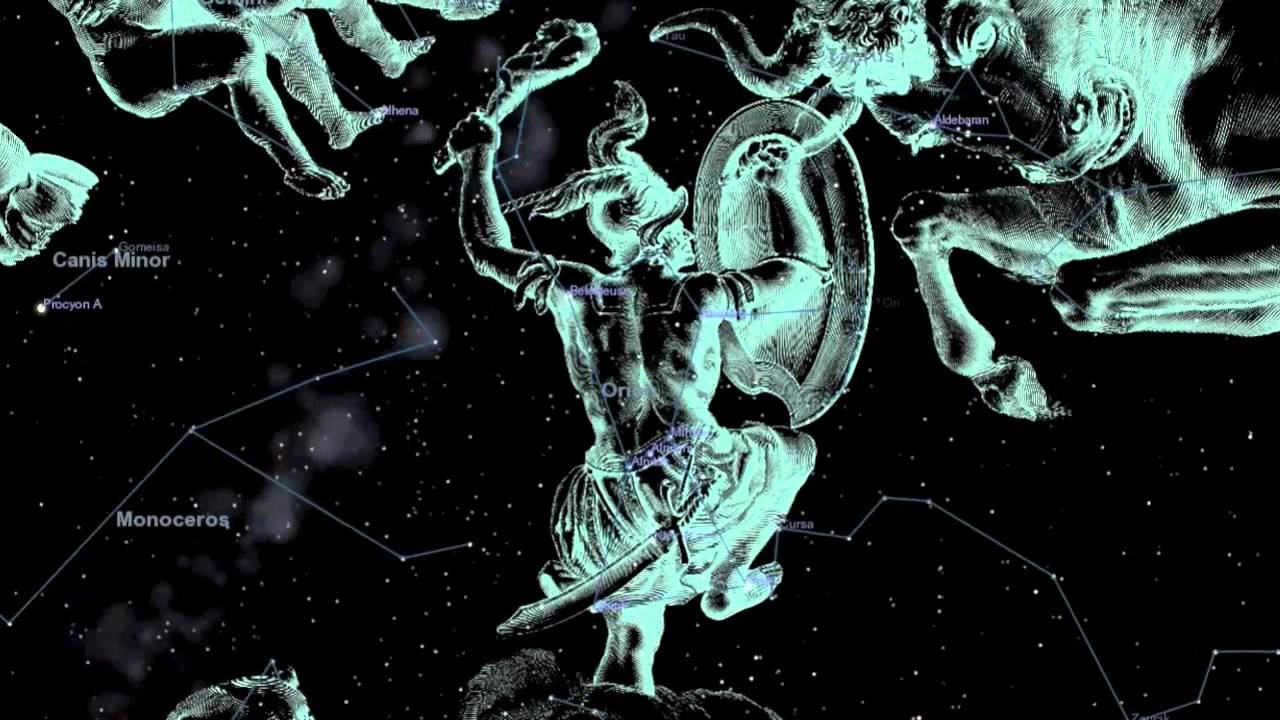 The evening skies of winter bring one of the most familiar groupings of stars, Orion, known as a giant, hero, or hunter in cultures throughout history and visible at some point of the year from every inhabited portion of the globe. Orion carries within it several stunning sights for both the naked eye and telescope observer, and we’ll be focusing on this constellation both this month and next. In this column I’ll start with a naked eye orientation to the bright constellation, and next month we’ll zoom in on some of the features visible through a telescope.

Orion rises in our evening winter skies as a tilted hour-glass figure marked by brilliant stars. At the beginning of the month he’s well over the horizon in the east by 8:30; by the end of December he’s nearly halfway up the sky in the evening. Two stars mark his shoulders, three his belt, and two his knees. Fainter stars trace out his head, sword, and shield or club he holds extended to the west. Each of the bright stars would be remarkable on their own, but together they make the constellation impossible to miss and twinkle fiercely low in the sky on crisp cold evenings.

The two stars marking Orion’s top shoulders are Betelgeuse (reputed to be a corruption of the Arabic for “Armpit of the Giant”) and Bellatrix (of recent Harry Potter fame—ask a fan what other characters appear in the winter sky). Betelgeuse has an unmistakable pale orange hue, which flickers beautifully when it’s low in the east. The stars in Orion present a snapshot of stellar evolution, and Betelgeuse is the old man in the crowd.

Betelgeuse is a dying star, a red supergiant near the end of its life. During this period of a star’s life it balloons to enormous sizes and can go through periods of instability, its tenuous radius heaving in and out like a slowly beating heart. Betelgeuse is thought to range from a radius of 800 million miles down to 480 million miles, which means at its smallest its surface would still extend beyond the orbit of Jupiter if it took our Sun’s place in our own solar system. Its density though is so low it’s less than a ten-thousandth of the density of the air we breathe, literally a “red hot vacuum.” It’s bleeding off this thin outer atmosphere into space, a dying giant lying just over 500 light years from Earth.

It’s fitting Orion is known as a giant in mythology, because the constellation is full of them. The star marking Orion’s knee opposite Betelgeuse, and providing a bright white-blue contrast to Betelgeuse’s pale orange glow, is Rigel. Rigel is one of the most luminous objects in the entire galaxy, outshining our own Sun by a factor of tens of thousands and at a distance from us of about 750 light years. Though it’s a supergiant like Betelgeuse and therefore has left the “middle age” that characterizes stars like our Sun, it’s younger than the pale orange star. And because more massive stars age more quickly, it’s likely younger than our Sun as well. Supergiants like Rigel (thought to be about fifty times the size and mass of our Sun) live short, hot, bright lives.

The stars in Orion’s belt, going from west to east, are Mintaka, Alnilam, and Alnitak. The star marking the remaining (eastern) knee is Saiph (meaning “Sword” though it’s far from the region of the constellation known as the Sword of Orion). All of these stars are giants or supergiants as well. What makes Orion such a rich area in space for the formation of these bright, young stars?

The answer is the huge clouds of nebulosity that spread throughout this entire constellation, dark and invisible. Though hundreds of times emptier than the best vacuum we can produce on Earth, these clouds stretch for hundreds of light years and contain enough mass to form thousands of Sun-sized stars, as well as a fair amount of giants. And that’s exactly what has been happening for millions of years in this portion of the sky. We can see it in action in the visible part of the cloud, known as the Orion Nebula, a fuzzy smear of light in the center of Orion’s Sword, just below his belt.

We’ll zoom in on this nebula with a telescope next month, but a good pair of binoculars also offers quite a view. In the center of the nebula a tight grouping of four very young stars, known as the Trapezium due to their shape, are causing the surrounding nebula to glow. These gems at the center of the nebula are among the youngest stars visible in the sky, a scarce handful of millions of years old. The nebula that surrounds them is one of the most famous sights in the night sky. Though it lacks the intense color and detail you’ll see in processed images from large telescopes, it’s still quite impressive for backyard scopes.

The astronomy Robert Burnham, Jr., quotes the journalist and astronomer C. E. Barns as saying, “For who would acquire a knowledge of the heavens, let him give up his days and nights to the marvels of Orion. Here may be found every conceivable variation of celestial phenomena: stars, giants and dwarfs; variables, multiples; binaries visual and spectroscopic; clusters wide and condensed; mysterious rayless rifts and nebulae in boundless variety, with the supreme wonder . . . at its heart—the Great nebula.” I tend to agree. Now that we’ve introduced the constellation, next month we’ll take a closer look at what Orion reveals to backyard telescopes.

This column first published in the Kankakee Daily Journal.