A couple years ago I did a stupid thing. My wife asked for a dining room table for Christmas, and I built her one. She told me it would be easy. She told me she wanted a rustic farmhouse table. She told me that meant it was supposed to be kind of blocky and rough and that I didn’t have to be a great finish carpenter like my dad to make it work.

It wasn’t incredibly easy, but it was easy enough that a guy with limited manual dexterity and some of his father’s borrowed tools could put it together over a few days in the basement and then haul it into the living room (out the back door and back in through the front because the thing was so massive) and put it together and hope to never have to move it again.

But it was a tactical error. Because now my wife seems to think I can build furniture.

I’ve held her off for quite a while. Besides some limited projects around the house, I’ve convinced her that most of what needs to be done should be done by skilled professionals or maybe doesn’t even really need to be done at all. But our youngest son had been sleeping on a mattress on the floor for over a year and it was really time to build him a bed. My wife hoped to turn the front dormer in the boys’ room into a built-in bed, and she showed me some pictures online that made me believe this might be a bit less involved than building a table.

Again, she was right.

So now I’ve built a bed. I started by measuring the dimensions of the dormer and the dimensions of the single mattress we needed to fit in there. The dormer is a bit wider than the mattress, and the mattress is a bit longer than the dormer, so the bed sticks out a bit into the room. And since we have three boys living in this room who like to jump onto and off of everything that’s higher than six inches off the floor, I knew I needed to make it sturdy. I had seen a few plans of built-in beds that were basically built on a frame of two-by-fours (or 2×4’s? how do the DIY guys type this out?) screwed into the wall. I wanted something that on the one hand was more stable than that and on the other hand was more free-standing. I wanted to be able to slide this back out of the dormer years down the road when the kids are in college and this room becomes my Don’t Go Up into That Room Because The Author is Working on His Next Great Novel room. 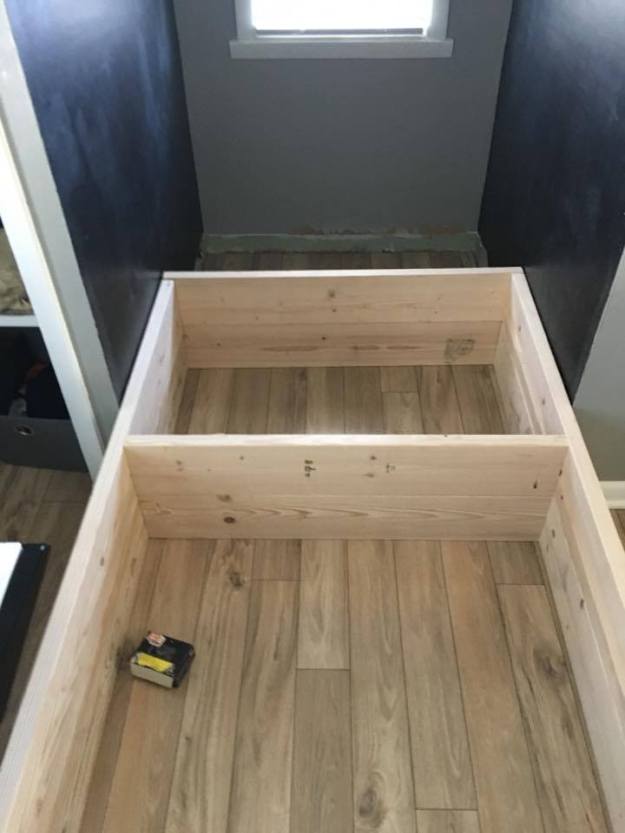 So I built a massive frame out of 2x8s (by convention, that’s how we’re going to assume contractor-types write these out). I used a Kreg-jig to put the boards together length-wise, mainly because it’s fun to use a Kreg-jig and to give the frame stability while I fit it together. (Note that immediately after taking this picture I had to hammer that middle cross-section out of place so I could slide the frame all the way into the dormer. The whole thing is wedged in there so tightly now I didn’t bother anchoring the frame into the wall. Don’t tell my wife.)

My wife wanted the open end of the bed to be a shelf for storage baskets, and she had very specific dimensions for the three storage baskets from Target that she wanted to be able to fit there. That determined where the second cross-support would go and the height of the bottom of the shelf. I was going to finish the bottom with trim anyway, so that gap would be covered up. Building the frame so high also meant that there were two big storage spaces under the bed for blankets and stuff in the summer.

Yeah, I probably went overboard with how solid I build the frame, but again– three boys jumping on absolutely everything.

I covered that shelf on the end with shelving boards that matched the piece of plywood in thickness. I had them cut the plywood to dimensions for me at Lowe’s, which only took three store guys, forty-five minutes, and about seventeen cuts. I put more 2x8s as support/separators between where those grey storage baskets are going to go. (Seriously, my wife loves her some storage baskets. Organization is her coping mechanism for life. And one of the reasons I adore her.) 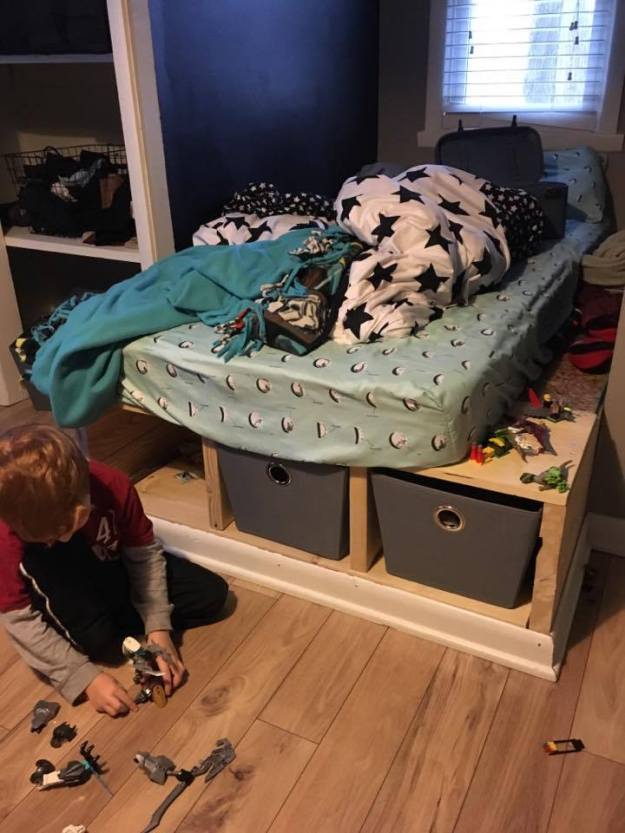 And presto– here’s the bed looking all lived in and moderately organized. I put trim around the base of the bed to complete that built-in look the wife was after. I’m still not quite sure how we (read: she) will do the finishing touches on this end, whether we’ll want to add some additional trim and then paint the whole thing white.

The best part of this project though was how incredibly excited our five-year-old was to go from a mattress to a REAL BED. I think every person who has been to our house over the past month has been escorted upstairs by him to see this wonder of a REAL BED.

And so far, only one or two head-to-bedcorner contacts during upstairs roughhousing, and no trips to the ER so far. (Yeah, I probably should have finished those edges with styrofoam guards.)