Neoglyphic is in the business of creating new ways to tell stories. It’s a transformation a long time in coming, the creation of media that unites story-telling, music, graphics and interactivity. Perhaps it’s been underway for years in the video-game industry, but it hasn’t yet carried over into electronic reading platforms. What I mean is this: prose itself is reaching the place where it can be transformed, for better or for worse. Publications are looking for submissions that blur the line between creator and audience, that find creative ways to use the now-fluid electronic medium to make stories more interactive. Again, some video games have been doing this very well for years, but they remain a specific platform and niche. Neoglyphic, it seems, is working to bring this transformation to story-telling itself, to transform how readers (not just players) engage with text.

To do that though, they have to position themselves as purveyors of story. They have to assemble writers and narratives, and they have to show that quality story-telling—with all the editing, advocating, and disseminating it entails—is part of what they do and what they do well. To this end, Threads: A Neoverse Anthology was born. Neoglyphic cast the net out for stories, and the anthology was their wide and varied catch.

What they caught was a school of strange fish, some frightening, some lovely, all of sleek and flickering hues, all from different depths and of different shapes and sizes. The stories in this volume, in other words, are of a huge variety. They range widely in polish and style and run the gamut from literary realism to psychological horror, from golden age scifi to technological thriller and on to lighthearted fantasy. (Full disclosure, this anthology includes my contribution, “Gold, Vine, and a Name,” which I will not be discussing below.)

Many of the stories feel like pieces of larger works (and the editor explains that this is indeed the case for some of the stories—that they are stand-alone chapters from novels, for example). This increases the feel (whether intended or not) that the work is meant to function as a patchwork showcase of sorts, of a collection of resources Neoglyphic can draw on in their quest to take storytelling in new and different directions. Whether this turns out to be the case remains to be seen, but there’s the sense here of launching, of piloting some new projects to see where they might go or how they might develop.

The anthology was organized around a contest, and the first three stories appearing in the collection are ranked in prize order. After that, the stories are alphabetical. This may have been to ensure the rest of them were treated equally, but it meant there wasn’t editorial freedom for structuring the flow of the anthology by giving the order of stories some organizational structure. What the book lacks in unified flow though, it more than makes up for in the artwork Neoglyphic created to accompany each story and tie them together. Each story has an introductory illustration by the same artist, and the cover (recreated as a full two-page spread at the conclusion of the volume) brings elements of each tale together in a dynamic mishmash that makes the collection of narratives leap off the page.

Some of the stories in this collection were especially striking on a first read. For example, Chuck Regan’s “Dysphoria” (the third-place winner) presented a grippingly horrific vision of a near-future alternate reality awash in chemicals. When most of the world has forgone a physical existence for a virtual one, a market has arisen to create and produce new psycho-chemical experiences. But who’s actually in control: the emotive artists creating them or the corporations selling them? “Say When” by Pamela Bobowicz and “Hotel Marietta” by Sabrina Clare were other stand-outs, literary pieces that look at issues of loss and how families (biological or adoptive) come together to cope. There’s a certain level of the saccharine in some of the works of the anthology, but these two do an excellent job of treating issue of the heart with earnestness and skill.

There’s great fantasy here as well: “Vanni’s Choice” by David A. Elsensohn and “Stormsong” by Tessa Hatheway, for instance, are solid and satisfying. In the first, we follow a thief breaking into the magical fortress of an enemy sorcerer and the choice she must make once she realizes the nature of what she’s been hired to steal. Elsensohn did such a great job building a world and a character in a manner of pages I wanted to follow Vanni directly to her next heist. Likewise, Hatheway’s “Stormsong” is a straightforwardly haunting tale of hubris and deep water.

“A Knight, A Wizard, and Bee— Plus Some Pigs,” by K. G. McAbee, is another fantasy piece in this volume that stuck out. The plot is straightforward—a knight arrives to slay a powerful wizard—but the tone and style is in the tradition of Terry Pratchett, and the humor makes it come to life. Like Vanni, I want to follow Bee and her new master across a few more pages. If a goal of the anthology was to generate readers for new adventures, McAbee and Elsensohn succeeded.

There were several good pieces in the anthology, but there was one that stood out above the rest. (No, I’m not talking about my contribution.) This was Katie Lattari’s “No Protections, Only Powers,” which the author admits in the introduction was written as an attempt to channel Stephen King. A young girl dabbles in some harmless witchcraft and makes a new friend along the way. In the background though, there are much darker things afoot. What makes this story so devastating is the way Lattari balances the details of suburban life and the shadowed view of a surly teenager but then makes those shadows hide genuinely frightening details that only become clear later on. Things are left unsaid or only alluded to, and the story becomes exponentially more chilling by its conclusion. Lattari has stepped into something deep in this one.

Where some anthologies have an overriding theme that ties the contributions together, this one has rather an overriding purpose: to tell and celebrate stories. It gives the work something of a patchwork feel, but it also means that whatever your tastes, if you have an appetite for short stories you’ll certainly find something in here to satisfy.

I write short stories. By definition, that means bits of fiction, snippets of story, brief windows into other worlds. It’s the medium that works best for writing at the margins of my day, which is my modus operandi right now. But it’s also the medium that lends itself well to community, to being one voice among many in a larger chorus of narrative. Often that means publication in magazines, alongside other stories, poems, or essays. Lately it’s meant appearing in anthologies.

Two anthologies have hit the shelves recently featuring my fiction, and both represent communities of story-telling of which I’m proud and excited to be a part. Both are available on Amazon and other platforms as both e-books and hardcopy.

The first is Mysterion: Rediscovering the Mysteries of the Christian Faith, edited by Donald S. Crankshaw and Kristin Janz. It’s not a collection of Christian fiction; rather, as the editors explain, it’s an anthology of writers who use their fiction to question, explore, or even challenge different aspects of the Christian tradition. It features my story “When I Was Dead,” which was inspired by C. S. Lewis’s The Great Divorce and received a wonderful review at Fantastic Stories. Mysterion is available here. 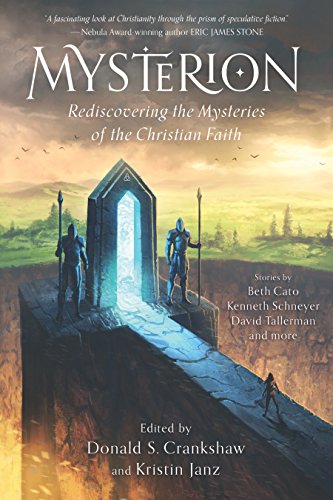 The second anthology just arrived on my doorstep, so I haven’t had a chance to dive into it yet though I’ve been thrilled to be a part of it. This anthology is Threads: A NeoVerse Anthology published by Neoglyphic as the result of their first short story contest. Out of thousands of entries, they culled these down to twenty stories, including my fantasy piece “Gold, Vine, and a Name.” I was blown away when two copies of Threads arrived in the mail including a print of the custom artwork created for my piece. Threads looks to be a sampling from the entire spectrum of speculative lit, and you can get your copy here. 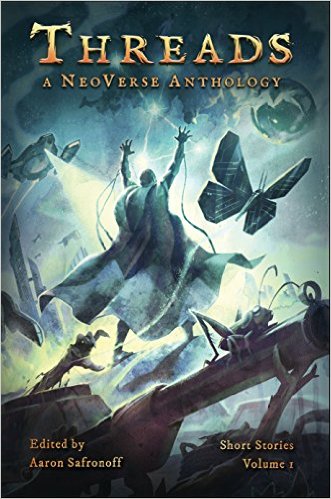 As always, if you read and enjoy, please consider leaving a review on Amazon.

In the meantime, when I’m not writing, I’m reading. Most of the books I review appear on my blog, but sometimes I’m lucky enough to review upcoming work by some of my favorite authors. This summer I was treated to a pre-release copy of Peter S. Beagle’s latest novel, and my review of it has just appeared in Strange Horizons here.

That’s all for now! More posts as events warrant . . .